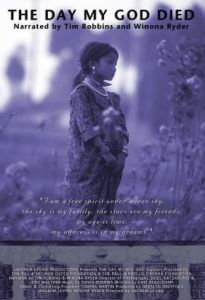 Asian sex trade, in which young women and girls as young as 8 are taken away from their homes to work in the brothels of India’s big cities. Subdued, broken, anonymous, they are kept as property by pimps and madams, usually in collusion with the police. Andrew Levine’s film pulls no punches in showing the brutality and desolation of this industry. But it also offers a ray of hope in the darkness – the tireless and devoted activists who are working to save women from a life of captivity and help them back into society.