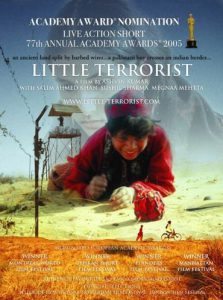 The Little Terrorist is a reminder that humanity and compassion can shine even in the most inhumane circumstances. In the deserts of Rajasthan, 10-year-old Jamal mistakenly crosses the border into India after chasing the ball in a cricket match. As a stray Pakistani in India, even at his tender age he is suspected as a terrorist, and is hunted by the army. An aged Brahmin takes Jamal in and shelters him, at great risk to himself, and doing so is forced to re-examine his opinion of Pakistanis, who, prior to 1947, were his own countrymen. It won director Ashvin Kumar an Oscar nomination.